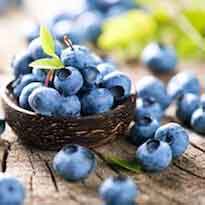 Blueberries –  Everything You Need To Know

Blueberries are one of America’s favorites berries for a reason. Perfect for breakfast, snack time, or even in desserts, blueberries are delicious, healthy, and versatile in restaurants throughout the worlds.

Maybe you purchase blueberries regularly, or have them as a part of seasonal presentations, but there are likely a few things about blueberries you do not know.

There’s More Than One Kind of Blueberry

If all the blueberries you’ve seen at the store look the same, maybe they are – but maybe they aren’t. Blueberries actually come in a few different forms and sales can vary by season and geography.

Highbush blueberries are the most common in both supermarkets and commercial distribution and are named for the high bushes they grow on. Highbush production is expected to reach 1.7 billion pounds annually by 2019. Lowbush blueberries are less common, but are still available throughout the year. They grow on shorter bushes and are smaller in size, but are often more flavorful and thus preferred in baking and jam production. The third main type of plant, rabbiteye blueberries, are most frequently available in the Southeastern U.S. and are named from the shape of the blossoms before the fruit ripens.

Maine is the Blueberry Capital of the U.S.

Think fruit has to grow in warm weather? Think again. Maine, the northeasternmost state with some of the mildest summer temperatures, is the blueberry capital of the U.S., cultivating the vast majority of the country’s blueberry crops. The state’s blueberries are grown across 44,000 acres and almost all of them are frozen and distributed as a cooking ingredient; only 1% of the total crop is sold fresh.

In addition to Maine, blueberries are also grown in several other states, including Florida, California, Michigan, and Washington. In total, the annual blueberry harvest in the United States could cover a four-lane highway from Chicago to New York if spread out into a single layer.

Have you ever noticed the slightly dusty or waxy appearance to these purple gems and assumed they were going bad or in need of a good wash? In reality, the waxy substance on the surface of blueberries is known as bloom and it’s a big part of how they keep their freshness. Acting as a natural barrier against bacteria and insect damage, bloom also helps to seal in moisture, preventing against premature spoiling.

Blueberries without bloom aren’t necessarily worse than those with significant bloom; some species simply have more bloom than others. Bloom is completely safe to eat and does not need to be removed before use or consumption. In fact, washing away bloom may cause lead to accelerated over ripening.

Blueberries are tasty, alone and in sweet and savory recipes alike, but they’re also good for you. With just 80 calories in one cup, blueberries are essentially a guilt-free snack. They’re also high in Vitamin C, antioxidants, and Vitamin K; a single cup of blueberries contains 25% of daily Vitamin C requirements.

In addition to daily nutrition, our little purple friends are tied to plenty of other health advantages. A 2012 study found a connection between regular blueberry consumption and delays in cognitive declines. Other studies have found parallels between blueberries and benefits to heart health, bone strength, skin, blood pressure, diabetes management, cancer prevention, and mental health. In addition, they also contain anthocyanin, which is beneficial for eyesight.

Whether you’re an ardent berry admirer or have thus far been reluctant to include America’s favorite treat in your menus and kitchens, there’s a lot to love about this seasonal fruit. As one of the nation’s most popular berry options, there’s no reason not to experiment with blueberries this summer.

Produce Services of Los Angeles is a proud partner and produce supplier to over 400 restaurants throughout Southern California! We carry a full line of wholesale fresh and frozen fruits and vegetables including blueberries along with dairy and dry goods! Not only do we support local farmers and source local produce whenever possible, we support up and coming talent in the food community.