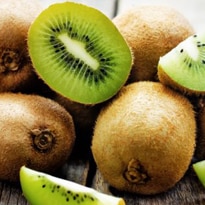 Kiwi from New Zealand are available throughout the summertime, ensuring consumers and food service outlets have a steady year-round supply of these juicy, nutrient-packed treats. 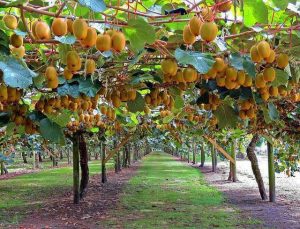 The California Kiwifruit harvest lasts from late September through to mid-November, with the large, sweet Hayward variety being the most commonly cultivated. While California farmers produce about 98% of the domestic supply of kiwi, the industry itself is relatively small – there’s currently fewer than 300 growers who have an average of 13 acres of land devoted to kiwi in the United States.

Despite the uptick in American production, New Zealand still holds the title as the world’s biggest exporter of kiwi – in 2015 they shipped a whopping $1 billion (USD) worth, representing 43.5% of global kiwifruit exports! By comparison, Italy, the second-largest exporter of kiwi, holds about 20.5% of the export market.

Despite the fact that kiwifruit has grown for centuries in China, it’s a relative latecomer to the U.S. marketplace, and there’s conflicting stories about how the commercial kiwi industry actually started in America.

Some reports claim that kiwi first hit the store shelves in 1962, when a “lone Safeway shopper” asked to have gooseberries imported from New Zealand. Legend has it that the produce importer immediately re-named the exotic fruit “kiwifruit”, and soon afterwards local farmers began cultivating domestic kiwi here in the Sunshine State.

Other accounts indicate that kiwi was introduced by the USDA in the 1930s by researchers who distributed plants for trials in the 1930s. While the plants themselves thrived, consumers shunned the new food, and commercial kiwi production ground to a halt. An enterprising farmer from the San Joaquin Valley revived the California kiwi industry in the 1960s with a small nursery in Porterville, packing the fruit into fig crates for shipping.

Regardless of which account is accurate, the fact is that California kiwifruit now ranks as one of the most popular items in the produce aisle.

In fact, these fruit even have their own designated day here in The Golden State. While folks in other parts of North America spend each February 2nd fixated on whether or not an overgrown rodent spots his shadow, in California that date is officially designated as “California Kiwifruit Day” – a day designed to raise awareness about all things kiwi. 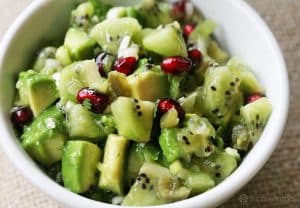 Kiwi is not only beautiful to look at and tasty to eat, but it’s packed with an impressive combination of vitamins, minerals, and nutrients. It has more Vitamin C by weight than an orange, and it’s also high in Vitamin K – the vitamin that’s needed to make blood clots form in the body, which in turn helps to prevent massive blood loss when the skin is nicked or punctured.

Kiwifruit is also high in dietary fiber, and its a good source of potassium, potassium, and folate too.

Kiwi is best served either chilled or at room temperature, and it makes a colorful addition to desserts, smoothies, salads, or even your main course.

So the next time you’re looking for a locally-grown exotic fruit to add to your favorite dish, why not give kiwifruits a go?

Produce Services of Los Angeles is a proud partner and produce supplier to over 400 restaurants throughout Southern California! We carry a full line of fresh and frozen fruits and vegetables including Kiwis along with dairy and dry goods!  Not only do we support local farmers and source local produce whenever possible, we support up and coming talent in the food community.