The Mysterious And Intriguing Origin Of The Caesar Salad 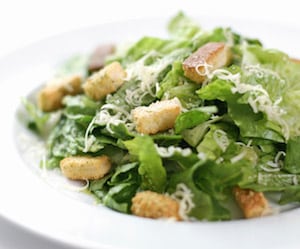 The Mysterious And Intriguing Origin Of The Caesar Salad

Pop quiz – what’s the most universal menu item in America, the one dish that you’ll find served everywhere; dingy truck stops, hipster-infested diners, fast-food joints and swanky Michelin-stared restaurants – they’ve all got it.

Of course, we’re talking about the mighty Caesar (the salad, not that Roman guy).

Much to the chagrin of many culinary purists, the once-mighty Caesar salad has been sliced, diced and diluted over the years. These days, it seems that virtually any salad consisting of a base of greens topped with a white, garlicky dressing and a few crunchy bits gets labeled as a Caesar salad; even the fundamental base of Romaine lettuce has been replaced with trendy, uber-healthy kale (we’ll talk about that some other time, ok?).

While many chefs and home cooks have (unsuccessfully) argued that they were the original inventors of this American salad staple, most foodies and culinary historians agree that the real truth lies somewhere just south of the border…

Caesar Cardini, an Italian-American immigrant from San Diego who owned a restaurant in Tijuana, Mexico (an Italian restaurant, not a Mexican one..) found himself short on ingredients one day (July 4, 1924 to be exact).

Rather than leave his border-hopping customers hungry, he tossed together what he had on hand – a few leaves of lettuce, some raw garlic, eggs, Parmesan cheese, olive oil, dried bread chunks and a splash of Worcestershire sauce.

And voila, the Caesar Salad was born, sort of…until a family feud broke out.

Apparently Caesar’s brother Alex claimed that he was in fact the inventor of the Caesar salad, first billing it as the ‘Aviator’s Salad’. The slighted sibling differentiated his salad from that of his brothers’ by adding anchovies, an ingredient which Caesar apparently despised.

This salad spat led to split in the Cardini clan; Caesar continued to serve up his rendition of his namesake dish in Tijuana, while Alex moved further south to Mexico City where he opened a chain of restaurants that featured the ‘original Alex Cardini Caesar salad’.

Given the history of the Caesar salad, it seems appropriate that it’s ingredients remain disputed today – cleary this is one dish that is wide open to interpretation!

P.S. – If you’re wondering why an Italian-American would own a restaurant in Tijuana, Mexico, check the date – one word: Prohibition!

Produce Services of Los Angeles supplies a full line of delectable fruits and vegetables to top restaurants throughout Southern California.  There are many Los Angeles produce companies but only one PSLA!  Please REQUEST A QUOTE or visit our homepage at www.pslainc.com to learn more!