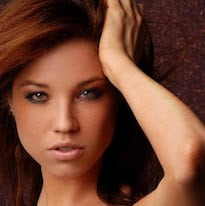 “Reality TV is set up to make people entertaining. A good person with values and principles is not good television.” Ronda Rousey 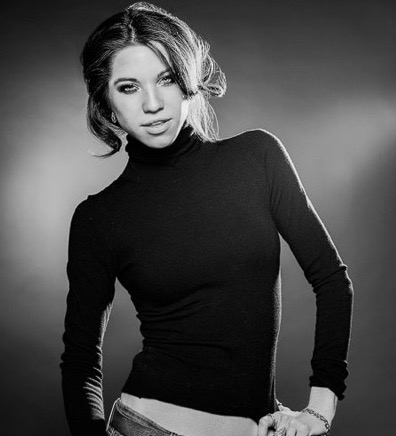 Chef Sarah Baumert – Professional kitchens are hotbeds of human interest stories – ask any chef how they landed in their current role, and you’re likely to hear about a seemingly unlikely career path. Sure, some culinary pros have nice, tidy resumes that read like a guidance counselor’s textbook, but that’s rarely the norm.

Great chefs come from all walks of life – Julia Child worked as both a copywriter, then a spy during

WWII before finally finding her true calling in Paris at Le Cordon Bleu at the age of 36. Nigela Lawson was also a bit of a late bloomer – her first cookbook was published at the age of 38, and despite her success as a cooking personality, she’s never had any formal chef training.

It’s also not uncommon to find chefs who have decided to ditch professional careers as lawyers, business executives and health care providers to pursue their love of food.

What is a rare occurrence is what happened to Chef Sarah Elizabeth Baumert, and that’s what makes her story an amazing one.

The Long Road To Culinary Success
If you’re a foodie, chances are good you’ve spent some serious sofa-time watching Fox TV’s culinary-focused reality show, Hell’s Kitchen. Since 2005, chefs from across the country have endured profanity-filled tirades from the notorious Gordon Ramsay – the Michelin-stared television personality, restaurateur and chef who is both feared, and revered by his proteges. 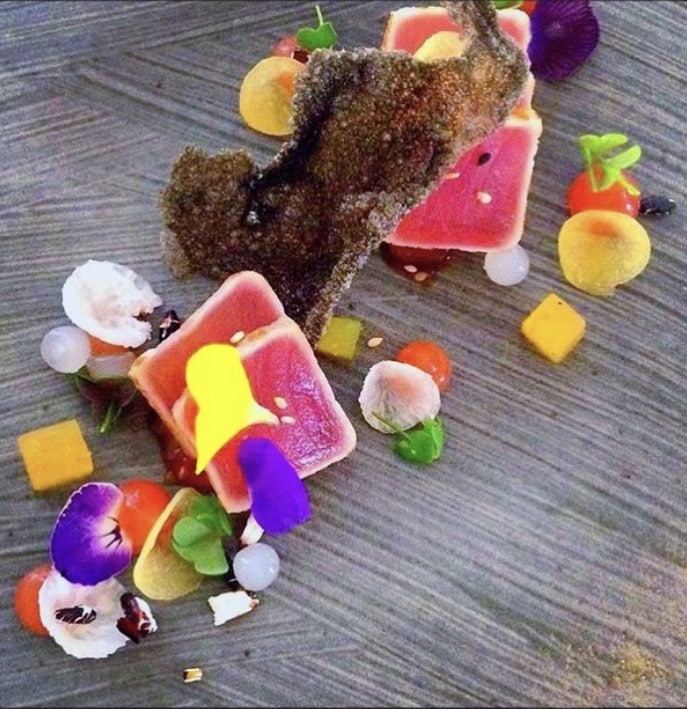 Very few chefs have the fortitude to face down the foul-mouthed Brit on national television, endure grueling competition and deal with the relentless pressure of reality TV, but Chef Sarah did exactly that – and the experience was transformational, to say the least.

Hailing from Dallas, Texas, Chef Sarah Elizabeth Baumert isn’t your typical hash-slinger – before donning her chef hat, Sarah had already earned a Bachelors of Science in Accounting from Miami University.

After earning her undergrad degree, Sarah headed to Paris, France to pursue her passion for food. She attended the mother of all culinary schools, Le Cordon Bleu while working at Michelin 3-star restaurants in the City of Lights, honing her impressive talents under some of the most renowned, and critical, chefs in the business.

Once Sarah came home to the U.S., she worked in restaurants in Columbus, OH, Phoenix, AZ, and Dallas, TX where her skills as a classically-trained French chef were in high demand.

Not one to rest on her laurels, Sarah decided to go where few chefs dared – Hell’s Kitchen, the Gordon Ramsay reality show on Fox.

She was accepted as a contestant in Season 14, where, along with 19 others, she competed for the prize of becoming head chef for Ramsay’s namesake Pub & Grill in Caesars Atlantic City. Chef Sarah entered the pressure-filled show with a healthy dose of realism, stating that “It’s a high-intensity situation… the kitchen always is, and that’s just part of being a chef.” 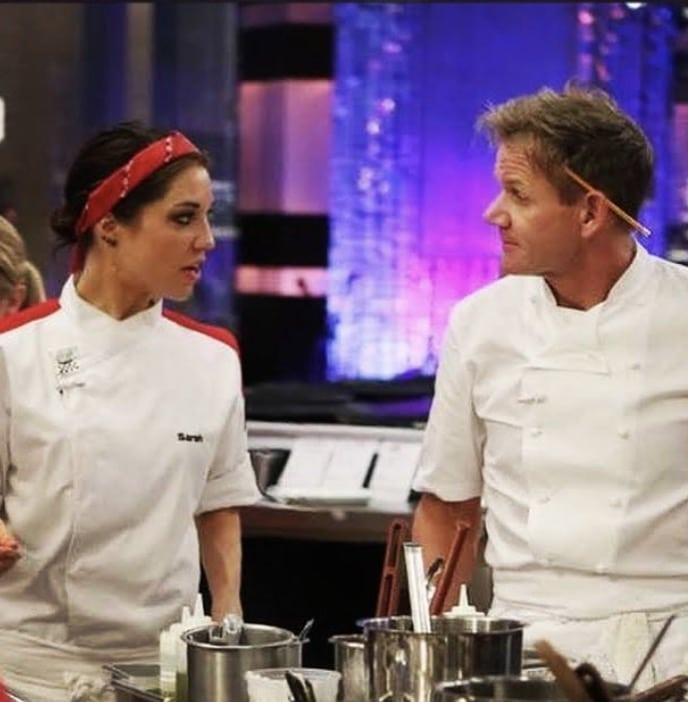 Like all ‘good’ reality TV shows, Hell’s Kitchen is chock-full of interpersonal conflict, drama, and absurdly unrealistic situations designed to evoke the full gamut of human emotion. Unfortunately, Sarah became a casualty of this challenging, and often cruel, environment.

Sarah was eliminated in episode seven, when she faced elimination for the third time (4th & 5th episode nominated) alongside her teammate Christine. Throughout her stint on the show, Sarah was portrayed as exceptionally talented – so talented that she was a real threat to the other members of her all-female ‘Red Team’, leaving her to fend for herself in a number of critical moments throughout the competition.

When she finally landed on the chopping block, Chef Ramsay said, “Sarah kept telling me she was here to learn. Unfortunately for her, I’m not looking for learners, I’m looking for leaders.” This, in spite of the fact that Ramsay was clear that he saw potential in Sarah early on in the competition.

Her experience on Hell’s Kitchen left Sarah with serious questions about her passion for food – in fact, it drove her back to school to pursue her CPA designation and make plans to hang up her chef hat for good.

Life Outside The Box

Sarah began studying for her CPA credentials, but she couldn’t shake the nagging feeling that she was destined to be more than a professional bean-counter.

Thankfully, Chef Sarah rebounded from her stint at Hell’s Kitchen and returned to the kitchen with a renewed sense of personal vision, confidence, and the unwavering support of her ever-growing fan base.

She’s reclaimed her reputation as a skilled, innovative chef, and she’s managed to overcome the adversity of her reality TV experience, transforming what could have been a devastating moment into a powerful motivator. 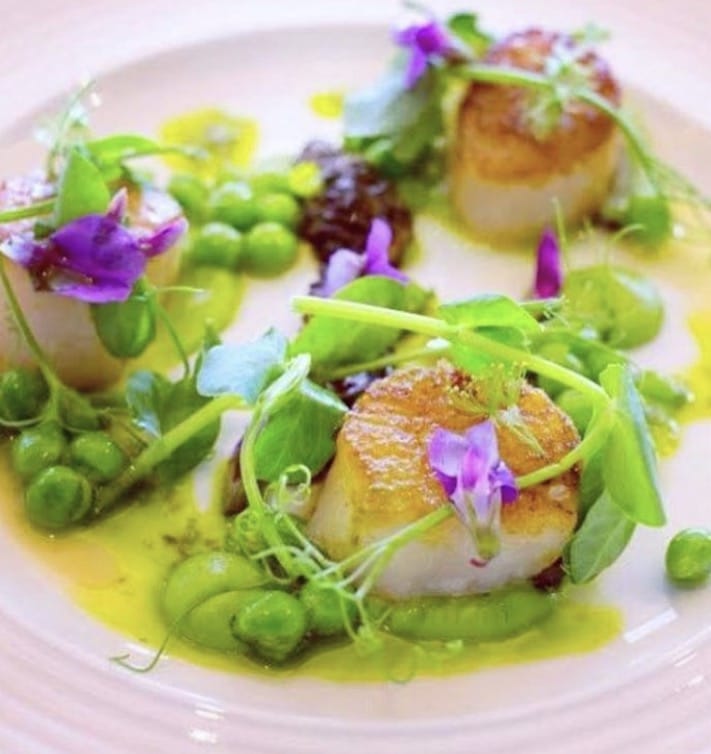 A quick glance at her social media feeds reveals that Sarah isn’t your typical over-educated millennial seeking instant fame through the Internet. Her Facebook page is chock-full of insightful, intelligent posts describing the science of healthy foods, and her passion for fitness and wellness is clear.

Chef Sarah’s Instagram posts are eye-popping creations that leave her followers both salivating at their screens and grateful that the Gordon Ramsay wasn’t able to break the spirit of this amazing, talented culinary artist.

In the short time since Hell’s Kitchen, Chef Sarah has built her personal brand, bringing together her passion for food, business savvy, and dedication to health and wellness.

She’s now a sought-after private chef, providing high-end, health-conscious meals for discerning clients who specializes in “taking the ordinary and making it extraordinary“.

So, the next time you’re looking for inspiration to eat your veggies, battle back against the naysayers, or a dose of motivation, be sure to check out Chef Sarah’s Instagram feed.

What’s next for Sarah? She is a “Renaissance Women” who wants to continue to dabble in all of her passions. Her goal is to combine her interests into a venture that includes culinary arts, fitness, and money management (Maybe a cook book here and there).  If you do your research, you will find that she has the culinary and fitness part down.  Now all she needs to do is complete the CPA exam and she will be well on her way to making her dreams a reality.  We see this as a sure thing for a women with the dedication and drive to come this far!  We look forward to watching her fulfill my dreams.

Produce Services of Los Angeles is a proud partner and produce supplier to over 400 restaurants throughout Southern California!  We carry a full line of fresh and frozen fruits and vegetables along with dairy and dry goods!  Not only do we support local farmers and source local produce whenever possible, we support up and coming talent in the food community.