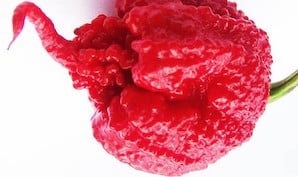 Looking to turn up the heat in your kitchen? Don’t reach for the thermostat – grab some of these record-setting, super-hot chili peppers instead! Before you do, be sure to don a pair (or two) of heavy-duty gloves, and throw on a pair of safety glasses, because these peppers feature other-worldly levels of heat that can do some serious damage to your skin (not to mention the soft tissue around your eyes….).

Measured using the Scoville scale, a scientific method of determining the perceived heat of a pepper developed in 1912 by chemist Wilbur Scoville, each of these peppers contains upwards of one million Scoville Heat Units per piece. By comparison, a few splashes of Tabasco sauce delivers between 2,500 and 5,000 SHU, so a tiny piece of these potent peppers goes a long, long way.

Here’s what you need to know about the top 5 spiciest chilis in the world:

According to the Guinness Book of World Records, the world’s hottest chili comes from right here in the U.S.A. Hailing from the Puckerbutt Pepper Company in Rick Hill, South Carolina, ‘ Smokin’ Ed’s Carolina Reaper’ is packed with a mind-blowing 1,569,300 Scoville Heat Units (SHU) per pepper – that’s about 100 times hotter than jalapenos!

With it’s 1,382,188 SHU per pepper, this compact, blood-red chili briefly held the Guinness record in 2011. The Naga Viper is a hybrid of three of the world’s most revered (and feared) peppers – the Naga Morich, the Trinidad Scorpion, and the Ghost Pepper. Don’t be decieved by the fruity smell of this one – when consumed, the heat builds up slowly on the palate, then hangs on for a long, hot ride!

Hailing from the hot, humid Carribean islands of Trinidad and Tobago, this sweet-hot pepper delivers an average of 1,200,000 SHU per compact, deep-red piece of fiery fruit, making it a must-try among chili-crazed connoisseurs. Those who are looking to reap health benefits from chilis favor this pepper, thanks to it’s high concentration of capsaicin, a naturally-occuring compound that’s used to combat pain from shingles, arthritis and sports-related injuries.

Originally from the Caribbean, this shriveled little chili looks a bit like an overgrown raspberry, but that’s where the similarities end. It’s named the Seven Pot thanks to it’s record-setting 1,100,000 SHU’s, said to be enough heat to add a fire-y kick to seven family-size pots of spicy Carribbean stew.

First grown by Brits Joy and Michael Michaud at Sea Spring Farm, in Dorset, England, the Dorset Naga held the title as the world’s hottest chili in 2006, weighing in with an impressive 923,000 SHU. Food historians and ‘chiliheads’ often regard this British-bred pepper as the fruit that gave birth to the ongoing chili pepper ‘heat race’ among chili farmers, setting the benchmark among those who love their peppers on the extreme side of hot!

So there you have it – the world’s top 5 spiciest, hottest peppers! Use these with extreme caution, and you know what they say – if you can’t stand the heat, stay away from these chilis!

Produce Services of Los Angeles, Inc. is a distributor of wholesale chili peppers, as well as a full line of other fresh and frozen fruits and vegetables.